To share your memory on the wall of Raffaele Rino, sign in using one of the following options:

Print
Raffaele (Ralph) Rino, 90, of Shelton, CT, loving husband of Josephine (Miceli) Rino, passed away on February 6, 2021, with his family by his side.

Ralph will be sadly missed by his wife Josephine of 63 years along with his children Anto... Read More
Raffaele (Ralph) Rino, 90, of Shelton, CT, loving husband of Josephine (Miceli) Rino, passed away on February 6, 2021, with his family by his side.

Ralph will be sadly missed by his wife Josephine of 63 years along with his children Antoinette (Toni) Mallozzi and her husband Antonio, Anthony and his wife Joanne and Anne Marie who predeceased her father. He will be missed by his beloved sister, Rosa Filardi of Calabria Italy. He will also be greatly missed by his grandchildren Stephanie Wandell and her husband Rich, Matthew Mallozzi and his girlfriend Lori Esposito, Isabella Rino, Nicholas Raffaele Rino and Gabriella Marin who predeceased her grandfather.

Ralph was born on January 20, 1931 in Calabria, Italy, son of Antonio Rino and Antonia Bernardo Ciddio Rino. Ralph immigrated to the United States in 1954 and worked in Gloversville, NY and later took a job working for General Electric in Schenectady, NY. Prior to Ralph coming to America he had completed his school work to become a teacher. Because of the economic challenges in Italy Ralph was sent to America to carve out a better life for his family. As his family moved to Brooklyn, NY Ralph opened up his first restaurant which started an almost 40 year career in the restaurant business. Ralph is best remembered for Emmy’s Pizza in Bridgeport, CT which he owned for almost 20 years.

We would like to thank all our family and friends for their prayers, love and support. The family would like to especially thank the wonderful caregivers at The Hewitt Rehab Center in Shelton, CT where he had been living for two and half years. The staff there treated Ralph like family which comforted our family on a daily basis. In addition, the family would like to thank DaVita Dialysis in Shelton, CT. In the last 11 years of Ralph’s career he received the most joy from working at the Beardsley Zoo in CT where he would often be found admiring the botanical gardens during his break time.

In lieu of flowers, donations in Ralph’s name can be made to the Beardsley Zoo in Bridgeport, CT.

All services will be private. A memorial Mass will be set at a later date.
Read Less

Receive notifications about information and event scheduling for Raffaele

We encourage you to share your most beloved memories of Raffaele here, so that the family and other loved ones can always see it. You can upload cherished photographs, or share your favorite stories, and can even comment on those shared by others. 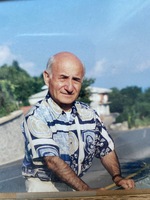