To share your memory on the wall of Nicholas Cavallaro, sign in using one of the following options:

He is survived by his wife Darlene (Jablonski) Cavallaro, his son’s Keith and Craig Cavallaro, daught... Read More
Nicholas “Nick” Cavallaro, age 79, of Naugatuck, son of Samuel and Ruth Cavallaro, passed away peacefully on February 20, 2021.

He is survived by his wife Darlene (Jablonski) Cavallaro, his son’s Keith and Craig Cavallaro, daughter Deneen Datcher and stepdaughter, Vicki Porto. He is also survived by his brothers Ron, Bob and Gary Cavallaro and sister Donna Cavallaro. His legacy has also continued with six grandchildren including, James and Emily Datcher, Kristen and Caitlyn Cavallaro, and Dylan and Devin Cavallaro. and several nieces and nephews including Kelly Reyes and David Oldfield.

Due to the Covid-19 pandemic his funeral services are private. The Riverview Funeral Home, 390 River Road, Shelton has been entrusted with his arrangements.

Receive notifications about information and event scheduling for Nicholas

We encourage you to share your most beloved memories of Nicholas here, so that the family and other loved ones can always see it. You can upload cherished photographs, or share your favorite stories, and can even comment on those shared by others.

Posted Mar 02, 2021 at 09:22am
My deepest condolences to the cavallaro family may he rest peace. 🙏
Luann piccirillo

Posted Feb 28, 2021 at 11:29am
My Big Head StepDad Nick. Me and Mom love and miss you so much. Thank you to everyone in the family and close friends during this difficult timr. I want to send my condolences to you all as well and we appreciate the support and love. We all loved Nick with his grumpy self :) and he brought us together as family. We love you!
Comment Share
Share via: 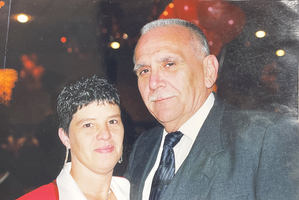